“All these happened while most of the other 100 million Filipinos, here and abroad, heard Mass, dined with their loved ones, watched movies, strolled in the park, laboured for their pay check, and just that, enjoyed their carefree Sunday.” 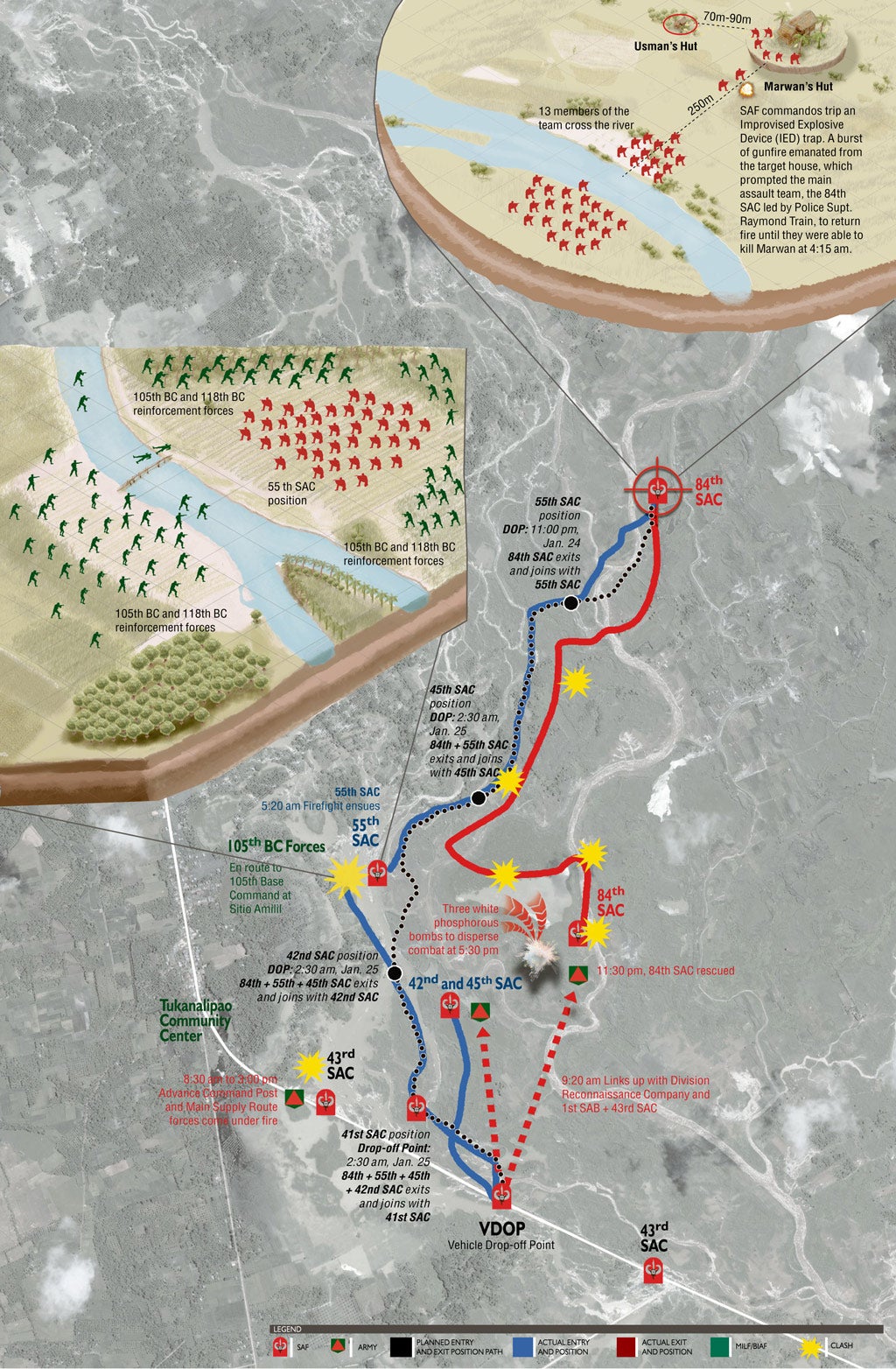 July 2012 — In another SAF operation, the police commandos reach the hideout of Marwan and other members of Jemaah Islamiyah in Lanao del Sur but the terrorists manage to escape.

Dec. 17, 2012 — An operation in coordination with the Armed Forces of the Philippines (AFP) does not push through due to lack of support and facilities. The Army’s East Mindanao Command cannot provide a helicopter requested by the SAF.

Nov. 29, 2014 — “Oplan Terminator” is also aborted because the locally made boat to be used by the SAF on the river in Mamasapano breaks down.

Dec. 12, 2014 —The SAF revives the plan, this time using tactical boats but a clash forces the SAF to retreat.

11 p.m. — According to the military, 392 SAF commandos are stopped at a checkpoint manned by soldiers from the 45th Infantry Battalion (45th IB). “We’re cops, we have a mission,” the commandos say when asked to identify themselves. Two SAF groups go into the marshland, the 84th SAF Company headed by Supt. Raymond Train and tasked to get Marwan and the 55th SAF Company headed by Insp. Ryan Pabalinas, serving as the blocking force. According to Napeñas, the 392 police commandos divided into groups take positions in Tukanalipao village, Mamasapano town, Maguindanao province. The plan is for a surgical operation of 30 minutes. Four nipa huts in the village are the targets of the assault.

4:30 a.m. — 84th SAF commandos reach the hideout of Marwan and engage in a fire fight that kills the terrorist. The team sends the message Tactical Command: “Mike One, bingo.”

The exchange of gunfire brings Marwan’s security to action. The policemen come under fire from all directions as they pull out. One SAF officer extracts DNA from Marwan as the firing becomes intense.

5 a.m. — Napeñas sends a text message to Maj. Gen. Eduardo Pangilinan, commander of the Army’s 6th Infantry Division, informing him of an ongoing police operation against Marwan. Napeñas does not ask for reinforcements.

The first group of SAF commandos manages to get out of Tukanalipao while the second group, the 55th group, which provides cover for the first group, gets into a gun battle with Moro rebels.

According to the Army, the Alpha Company of the Army’s 45th IB hears gunfire about 4 kilometers away from the detachment. The 45th IB informs the brigade.

8:45 a.m. — Army reinforcement team sees the remaining 300 plus SAF commandos who have not entered the marshland scattered in the street. “Just sitting,” according to the Army report. Army reinforcement team talks to two SAF commanders on the ground—Supt. Hendrix Mangaldan and a certain Supt. Mangahas—to ask for the grid coordinates of the Train and Pabalinas teams. Neither officer knows the coordinates. The Army reinforcements proceed into the marshland. The SAF commandos refuse to go with them. The 45th IB receives a call from a member of Train’s group, saying: “Hill, we’re on the hill in Barangay Tukanalipao. We are surrounded by the MILF. We have eight dead, three wounded and one missing. We cannot get out.” The Army soldiers figure out the commandos location and proceeds to extract them.

12 noon — The SAF commandos are still alive though many of them are wounded and they are running out of ammunition, Napeñas says quoting PO2 Christopher Robert Lalan, a member of the second SAF group and the only one who survived the gun battle.

1 p.m. — Napeñas loses contact with the troops who are pinned in a cornfield.

2:30 p.m. — Joint Army and SAF forces set up a tactical command post to coordinate communications as there is no contact with SAF units in the marshland.

3 p.m. — Army artillery support tries to enter the marshland but fails due to narrow passages. Army’s V150 tank is hit.

7 p.m. — Soldiers retrieve the bodies of the SAF casualties. They radio the battalion to inform the 300 SAF commandos that everything is clear. SAF finally moves and helps the Army in retrieval operations.

8 p.m. — Soldiers locate Train and remaining members of his team and extract them safely.

2 p.m. — Lalan, the SAF survivor from Train’s team, is located by soldiers and taken to Army 45th IB headquarters to rejoin other SAF commandos. An angry Lalan kicks one of his comrades, demanding to know why reinforcements never came to support the two SAF groups that went in for the operation as planned.

Jan. 27, 2015 — Napeñas is sacked and recalled to Manila as a board of inquiry from the PNP is convened to investigate the botched SAF operation. He is replaced by his deputy, Taliño.

Jan. 28, 2015 — President Aquino addresses the nation, declaring a national day of mourning on Jan. 30 for the 44 police commandos killed in the Mamasapano operation.

Feb. 4, 2015 — US Federal Bureau of Investigation (FBI) confirms that Marwan is dead. In a statement sent to the Inquirer, David Bowdich, assistant director in charge of the FBI’s Los Angeles office, says tests showed the DNA sample sent by the Philippine government belonged to Marwan. “Although the results of the DNA examinations do not provide absolute identification, the results do support that the biological sample provided by Philippine authorities came from Marwan,” Bowdich says. He says there is a need for further tests and analysis by laboratory examiners “in an effort to fully identify the subject of DNA provided to the FBI.”

Feb. 9, 2015 — The Senate committee on public order, chaired by Sen. Grace Poe, along with the Senate committees on peace and finance, begins an inquiry into the Mamasapano operation. The inquiry ends after five hearings on Feb. 24, 2015.

March 12, 2015 — The PNP Board of Inquiry (BOI) submits their report confirming six “American nationals” were at the command center of SAF in Shariff Aguak town, Maguindanao province, hours before members of the elite police counterterrorism unit swooped down on the lair of Marwan. But US presence was limited to intelligence sharing and medical evacuation, their report says. The report also states that Mr. Aquino broke the PNP chain of command when he authorized suspended PNP chief Alan Purisima, a personal friend, to take part in the SAF operation though he was suspended and being investigated for corruption.

March 17, 2015 — Poe presents her committee’s draft report on the Mamasapano clash. The Senate report states that President Aquino had given assent to and had failed to prevent Purisima’s unlawful exercise of official functions” of the SAF operation called “Oplan Exodus.” For this, the report finds Mr. Aquino “ultimately responsible for the outcome of the Mamasapano mission and must “bear responsibility” for the carnage.

April 16, 2015 — The Department of Justice (DOJ) and the National Bureau of Investigation (NBI) submits their joint report on the Mamasapano operation, recommending the filing of criminal charges against 90 Moro rebels for the deaths of 35 police commandos during the clash.

Oct. 8, 2015 – The DOJ investigators release the second and final part of their report on the Mamasapano clash, ruling out direct United States involvement in the Jan. 25 fight.