Maguindanao Massacre – How it Happened 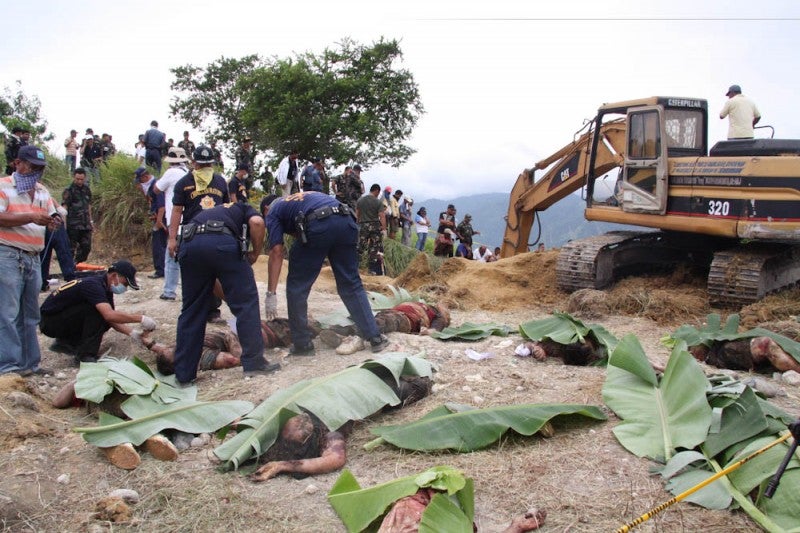 Monday, 23 November
6:00a.m. to 7:00a.m.
Journalists gather at the residence of Khadafeh Mangudadatu. He is instructed to be in charge of the journalists joining the filing of the certificate of candidacy (CoC) of his brother, then Buluan Vice Governor Esmael “Toto” Mangudadatu.

Around 7:00a.m. to 7:30a.m.
Journalists proceed to Toto Mangudadatu’s residence. The convoy supposed to file his CoC is scheduled to leave for the Commission on Elections (Comelec) office in Shariff Aguak, Maguindanao at 9 a.m. but is delayed due to security concerns.

7:30a.m. to 8:00 a.m.
The Mangudadatus seek police and military assistance. Toto Mangudadatu in his complaint-affidavit recalls having called up Col. Medardo Geslani and P/Chief Supt. Faisal Ampao Umpa, Regional Director of PNP-ARMM. The military later explained two battalions have just pulled out, and requests for election-related security concerns have to be coursed through either the police or the Comelec, which will then make the request to the military.

9:30a.m.
A convoy of seven vehicles leaves Buluan bound for Sharriff Aguak, the provincial capital. In the convoy are two media vehicles—a Mitsubishi L300 van owned by UNTV, and a Pajero owned by dzRH reporter Henry Araneta; four Toyota vans owned by the Mangudadatus; and a tailing Toyota vehicle.

10:00a.m.
The Mangudadatu convoy passes through a checkpoint at Brgy Masalay, Ampatuan, Maguindanao from Esperanza, Sultan Kudarat. The convoy of at least five vehicles is flagged down by then-undetermined number of fully armed men.

Sworn affidavits of police officers manning the checkpoint narrate how the convoy has been ordered to stop for routine inspection when a group of around 200 men appear and accost the vehicles. 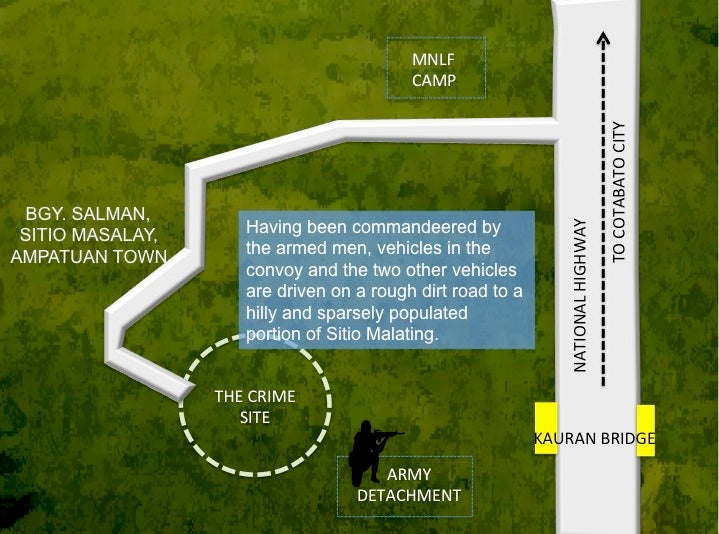 Photo from the National Union of Journalists

PO1 Hernanie Decipulo, a policeman manning one of the checkpoints, narrates in his sworn statement:

“Around 10:00 am of Nov. 23, a Tamaraw FX, a red Vios, a light Pajero and four Hi-Ace vans were flagged down at the checkpoint.

“Then, the armed men took charge of the seven waylaid vehicles. They ordered my fellow policemen to step aside.

“CVOs and CAFGUs alighted from the vehicles and went to the waylaid cars. They took from the victims their personal belongings including cellphones, ordered them to get off their vehicles and to lie down on the ground.

”They were asked to get back to the vehicles. Some of Andal Ampatuan Jr.’s men drove the waylaid vehicles en route to Ampatuan town.” 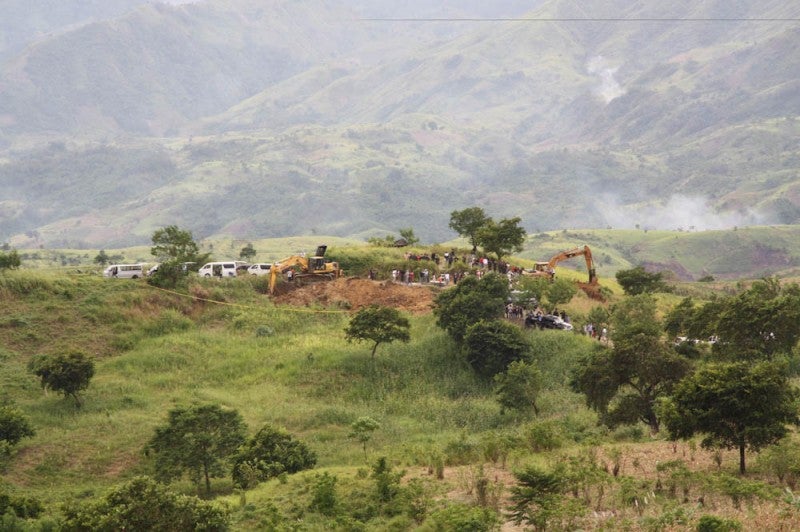 A yellow Komatsu backhoe is seen to stand at a hilly portion of Brgy, Salman. Written on the backhoe are the words “Property of the province of Maguindanao – Gov. Datu Andal Ampatuan Sr.” The backhoe is used to dig three mass graves.

10:30a.m. to 11a.m.
A series of gunfire shots reportedly erupt at Brgy. Saniag, the area where the reportedly abducted vehicles are said to be brought (Napolcom report, Dec. 7, 2009) 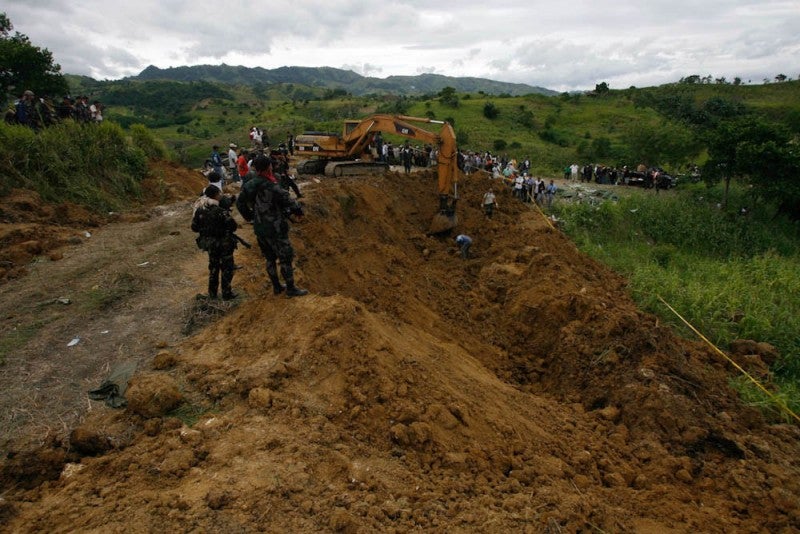 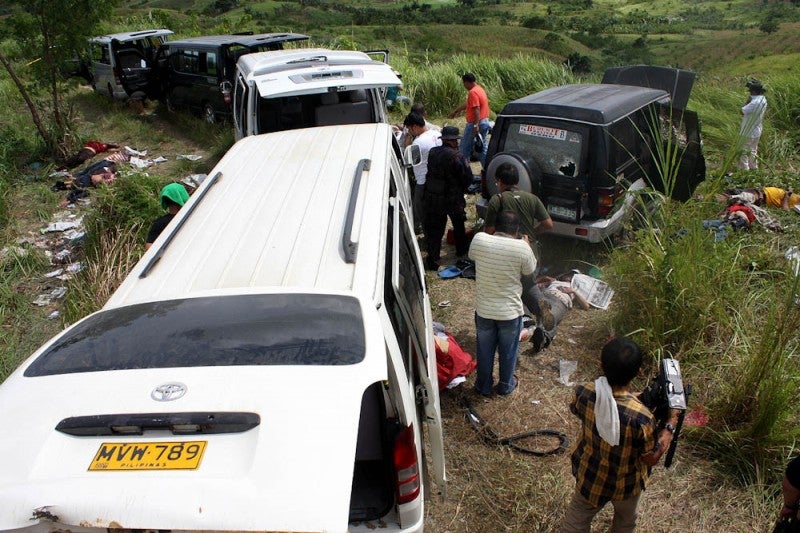 1:00p.m. to 1:30 p.m.
64IB forces arrive at Brgy. Masalay and coordinate with Chief Inspector Sukarno Dicay of 15th Regional Mobile Group who is conducting a checkpoint there. Dicay says his group has no knowledge of the alleged abduction.

2:50p.m.
Troops see six vehicles along the trail after driving along the highway at Brgy. Salman. Suspecting these may be the missing vehicles they immediately head toward the site. 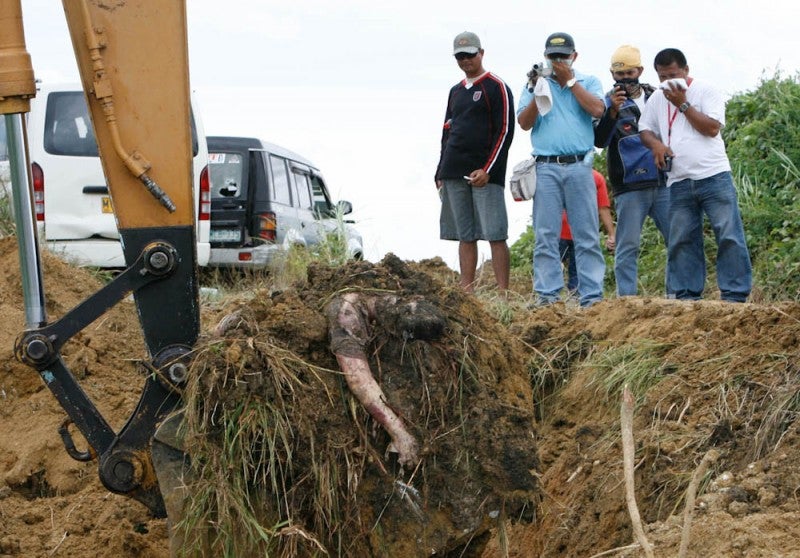 3:00p.m.
The gunmen apparently learn Army units are approaching. They hurriedly flee before the soldiers arrive.

Twenty-one persons are initially found dead inside and outside vehicles. The victims are discovered to have borne multiple gunshot wounds.

Five vehicles are also found in the area and one backhoe. Various personal items, assorted empty shells and other documents are also recovered at the site. 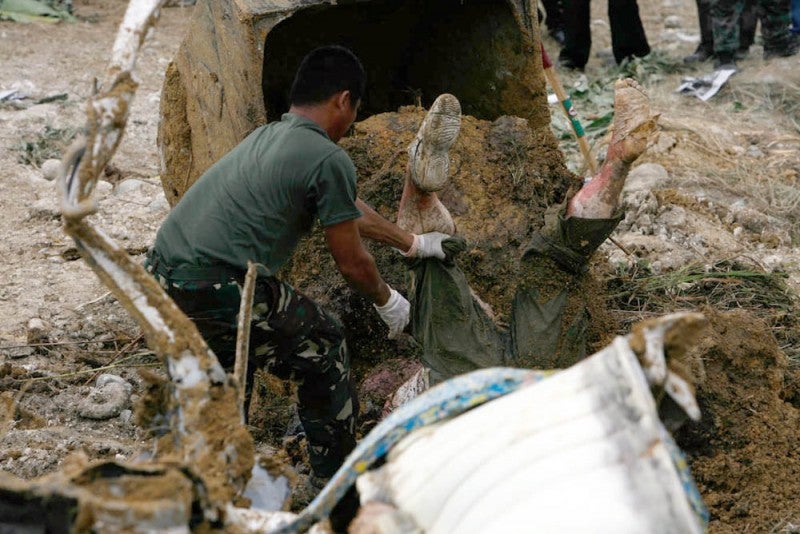 There are three grave sites. A total of 35 bodies are found in the graves. The first grave has 24 bodies, including Genalyn, Eden and Farina Mangudadatu. In the second grave are six bodies, and in grave three, five bodies. Some of the vehicles that carry the members of the convoy and civilians who are not part of the convoy are also found buried. 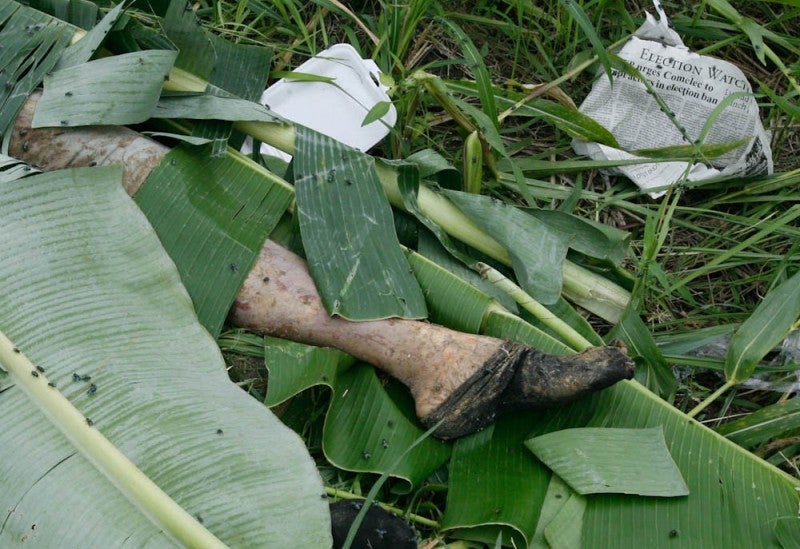 Source: National Union of Journalists of the Philippines

Gov: Why only Tarlac as quarantine site?

Filipino among new cases of COVID-19 in UAE

Reminder from Archbishop Soc: No clapping during Mass

Disclaimer: Comments do not represent the views of INQUIRER.net. We reserve the right to exclude comments which are inconsistent with our editorial standards. FULL DISCLAIMER