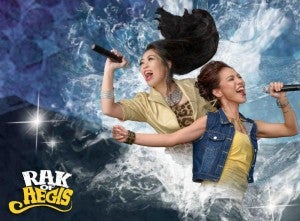 The music of the legendary pop-rock band Aegis conquers the local theater scene as the Philippine Educational Theater Association (PETA) closes its 46th Theater Season with “Rak of Aegis”, a Pinoy rock comedy-musical featuring the songs of Aegis. Opening January 31 at The PETA Theater Center, “Rak of Aegis” will run for 6 weeks, Fridays to Sundays until March 9, 2014.

A story of love, fame and resilience, the narrative revolves around the residents of the flooded village of Villa Venizia.  At the center of the story is Aileen (Aicelle Santos alternating with Joan Bugcat) a young mall promodizer caught in the web of finding love and seeking fame to support her family.

Aileen’s family like the other residents are greatly affected by the flood. Her father Kiel is in the brink of losing his job as baranggay captain Mary Jane (Isay Alvarez-Seña) plans to close her failing shoe factory.

Knowing that her income will never be enough to make ends meet, Aileen decides to make a video of herself in the hopes of becoming the next YouTube sensation. Aileen’s suitor Tolits (Jerald Napoles alternating with Pepe Herrera) posts the video online, unaware that it will put Villa Venizia under the spotlight and change their lives forever.

“Rak of Aegis” is a musical filled with visual spectacle showcasing the Pinoy’s natural love for music and innate resilience in the face of calamity. The musical is created by the same women behind PETA’s hit comedy musical “Care Divas,” PETA Artistic Director Maribel Legarda and Palanca Award-winning writer Liza Magtoto, with musical arrangement and musical direction by actor-musician Myke Salomon.

Jumpstarting the economy after a pandemic

16.8M Americans thrown out of work as economic toll rises

Mandaluyong hospital’s chief nurse passes away due to COVID-19

16.8M Americans thrown out of work as economic toll rises

Wiped out of toilet paper? Here’s why

Disclaimer: Comments do not represent the views of INQUIRER.net. We reserve the right to exclude comments which are inconsistent with our editorial standards. FULL DISCLAIMER